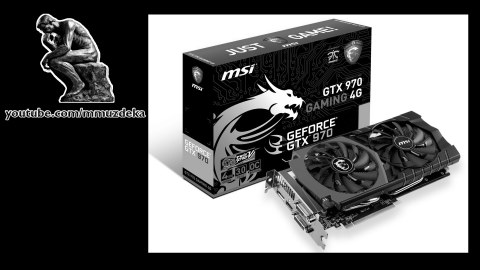 In this blog post i will show unboxing of MSI Nvidia GTX970 Gaming 4G and benchmarks of this card done in different benchmark programs.
If you are interested in what comes in the box with this card and how does it perform, than this video should answer those questions.

In general, card looks to be quality built even though there is no backplate and during tests it was decently quiet until i enabled OC mode via MSI gaming app and run GTA V test. After that card was louder but still not too loud.

Via additional apps it is possible to over-clock or configure the video card to enable or disable LED diode light on it.

First benchmark test was done with Metro Redux benchmark tool on Very high settings which is highest quality setting available in the tool. Rest of the settings were mixed and you can see them on the screen.

Results show that in 2 tests done average frames per second are just above 40 which is ok result but lower than expected with this card. Lowest FPS was around 10 which would make actual game unplayable in some scenes.

I’m not sure why Metro benchmark went this bad but rest of the tests showed much better results.

Next benchmark test was done with Heaven Benchmark 4.0 with Ultra settings.

FPS achieved in this test was more than good comparing to the high test settings which were set. All scenes were smooth and lowest FPS was very short 25 FPS moment.

Next is GTA V benchmark with mix of very high and high settings.

I did a test with high settings only just to demonstrate how slightly lower settings can dramatically increase FPS even though FPS on previous test was always above 60 FPS which is more than enough for smooth game play.

GTA V on slightly lower settings (around High) will result in much better FPS.

It is a time for conclusions: this is a great card which i’m using for past 5 months and i still didn’t have any issues with it. Performance is great and besides some extreme cases it is a quiet card. If you would like to see some other benchmarks or game play let me know.

This website uses cookies to improve your experience while you navigate through the website. Out of these, the cookies that are categorized as necessary are stored on your browser as they are essential for the working of basic functionalities of the website. We also use third-party cookies that help us analyze and understand how you use this website. These cookies will be stored in your browser only with your consent. You also have the option to opt-out of these cookies. But opting out of some of these cookies may affect your browsing experience.
Necessary Always Enabled
Necessary cookies are absolutely essential for the website to function properly. This category only includes cookies that ensures basic functionalities and security features of the website. These cookies do not store any personal information.
Non-necessary
Any cookies that may not be particularly necessary for the website to function and is used specifically to collect user personal data via analytics, ads, other embedded contents are termed as non-necessary cookies. It is mandatory to procure user consent prior to running these cookies on your website.
SAVE & ACCEPT